Category: All, B&F in the News, Press

On Wednesday night, during the Girl Scouts Annual Meeting, Rick was honored with the Thanks Badge. The honor, presented by incoming Board Chair Regina Buckley, recognizes outstanding performance that benefits the Council, as well as the entire Girl Scout movement. 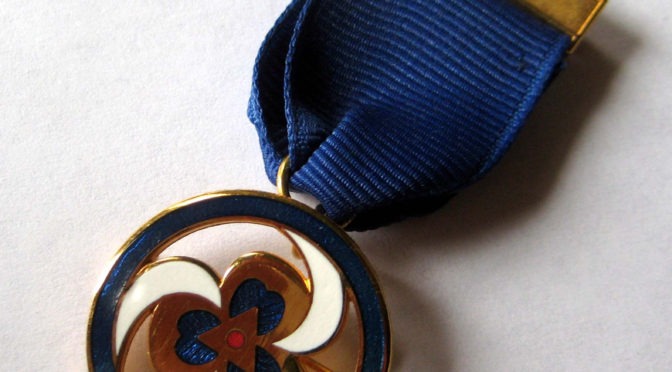 “You’ve acted as a role model and fearless leader even under the most challenging of circumstances,” said Regina. “Your commitment, perseverance and willingness to donate your time and resources to enriching the lives of girls everywhere has set an inspiring example, not only to me, but to all of us who have made this goal our life’s mission.”

Rick has served on the Board of Directors of Girl Scouts San Diego as Vice Chair from 2013-2014 and Chair since 2015. He has also chaired their Investment Committee and served on the Executive Committee since 2012. Rick originally volunteered with the Girl Scouts because of the fantastic experiences it provided for his daughters, and his belief that the Scouts help nurture the kind of young women he wants his daughters to be, and his son to marry.

“Today’s Girl Scouts will be tomorrow’s leaders, and I’ve been inspired at every turn,” said Rick. “Serving Girl Scouts San Diego has been one of the most uplifting experiences of my life, and I wouldn’t have traded it for anything.”

In his six years working on the Girl Scouts’ Board, Rick has worked with all Girl Scouts stakeholders to fund and complete $2.5 million in deferred maintenance projects, rebuild Cabin 3 in Balboa Park, stem a national tide of declining membership, and reorganize professional staff to better support volunteers and Scouts. His countless hours of service and support to the Girl Scouts earned him the highest honor an adult Girl Scout volunteer can receive.

To conclude the ceremony, Rick transferred leadership to Regina Buckley, the new Chair of Girl Scouts San Diego. Rick presented Regina with the ceremonial gavel to represent the leadership transfer from one Council Chair to the next. Rick will remain on the Board for one more year as an ex-officio member.

Rick Brooks, CFA®, CFP® is a partner and Chief Investment Officer at Blankinship and Foster, a wealth management firm located in Solana Beach California. Rick graduated from Duke University with a BA in 1989 and San Diego State University with an MBA in 1998.

Girl Scouts of the USA is the nation’s preeminent leadership development organization for girls, with a mission of building girls of courage, confidence, and character, who make the world a better place. Girl Scouts San Diego is celebrating its 100th anniversary during 2017. More than 35,000 girl and adult members in San Diego and Imperial counties benefit from year-round activities and training. Headquartered in Balboa Park, Girl Scouts San Diego maintains two camps in the Cuyamaca Mountains, a program center in Escondido and a service center in Carlsbad. To volunteer, reconnect, donate, join or learn more, visit SDGirlScouts.org, Facebook, Pinterest, Twitter and Instagram (@sdgirlscouts).