A popular economic theory suggests that if tax rates are at zero or 100%, the government will raise no revenue in either case. 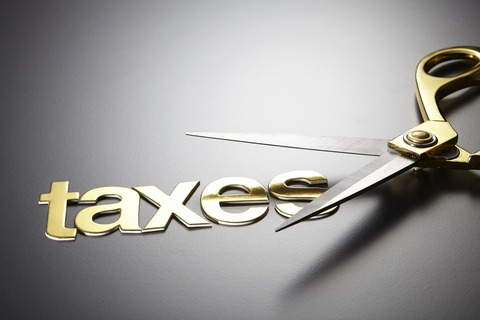 At 100%, all income goes to the government so there is no incentive for people to work, while a tax rate of 0% obviously raises no revenue. At every point between zero and 100, tax revenue increases as you move to some theoretical center point on a curve, at which the government receives the maximum tax revenue. This is an over-simplified description of what has come to be called the Laffer Curve, first proposed by Art Laffer, an economist.

Clearly, this is a theoretical construct, but as talk in Washington turns towards cutting taxes, it begs the question of how effective tax cuts are at stimulating economic activity. The argument for tax cuts is that the ‘lost’ revenue will be made up in the future as higher economic growth creates more tax revenue even at lower rates.

In the discussion above about the Laffer Curve, clearly, economic activity would increase as tax rates fell from 100% to something else. The theoretical foundation for tax cuts as economic stimulus basically states that when taxes are lowered, people will have more money to spend on goods and services, thus increasing general economic activity. Politicians proposing tax cuts often suggest the cuts pay for themselves: higher economic growth creates higher tax revenues in the future, even at lower tax rates.

This was the basis for a massive tax cut in Kansas a few years ago. The results have been generally negative. Government spending was not cut as quickly as tax revenue, so deficits exploded. More importantly, economic growth in Kansas has actually been weaker than surrounding states with similar economies, so it isn’t clear that the tax cuts were effective at creating growth, either. Moreover, the massive deficits have caused the state to slash spending on all services, from public safety to education.

At the Federal level, the Congressional Budget Office estimates the impact of tax cuts differently, depending on who receives the benefits. For example, since lower income workers spend pretty much every dollar of income, CBO estimates that tax cuts for these people have greater impact because the money received (saved) is automatically spent on goods and services. Tax cuts for wealthy people are scored lower, because they are more likely to be put towards savings, investment or debt reduction. These are useful activities, but not necessarily effective economic stimulus. Thus, in evaluating whether or not tax cuts stimulate the economy, the actual economic benefit would depend on whose taxes are cut and by how much.

On the other hand, if you assume that government spending grows with the economy, then cutting taxes results in increasing deficits from the moment taxes are cut. The three most recent examples (2001, 2003 and 2009) of tax cuts each resulted in much higher deficits. Without offsetting spending cuts, tax cuts do not pay for themselves as is often claimed; they only increase the deficits.

Cutting government spending is not a slam-dunk. It means laying off government workers and cuts to some popular programs. Congress hasn’t been able to do it in the past, so I’m skeptical they will be able to cut spending this time. And without reducing spending, cutting taxes just means higher deficits, and possibly higher interest rates and inflation. The economic benefit remains to be seen.

Do you worry about the impact the economy and government policies may have on your finances? At Blankinship & Foster, we believe that with a well-crafted financial and investment plan, you will be much better prepared to deal with economic and government changes. Contact us to learn more about how we can help you.

6 responses to “Do Tax Cuts Really Stimulate the Economy?”