If we’ve learned nothing in the past nine months, it’s that fiscal stimulus (cutting taxes and increasing government spending) is a very effective driver of economic activity. The government’s first estimate of Gross Domestic Product (GDP) growth for the second quarter was 4.2%, and the Wall Street Journal’s monthly survey of economists has third quarter growth running at about 3.2%

U.S. investors have largely shrugged off concerns of trade wars and geopolitical volatility with the S&P 500 rising 7.7%. Small company stocks underperformed larger companies, growing 3.6% during the quarter. Overseas investments have been weak for most of the year as strong U.S. growth propelled U.S. stocks. Stocks of companies in developed economies (Europe, Japan, etc.) rose just 1.3% in the third quarter. Emerging markets stocks continued to slide during the quarter, shedding 1.1% due to a combination of trade war blustering, U.S. tariffs and a rising dollar.

Other diversifying investments like Master Limited Partnerships (“MLPs”, up 6.6%) and real estate (up 0.7%) were positive but did not keep up with the U.S. stock market.

As we head into the final stretch of 2018, we remain optimistic about the economy and the markets, at least in the near-term. The current economic expansion is the second longest since the Civil War and may end up being the longest in U.S. history. Consumer spending is very strong, unemployment is at 3.9% and average hourly wages jumped 2.9% in the last year, the highest gain since 2009. That said, wage growth has averaged 4.1% since 1969, so the “average” worker may not have felt the full benefits of expansion.

Inflation remains relatively mild, though the headline Consumer Price Index recently posted a 2.7% year-over-year growth, boosted by rising energy prices. If the trade spat with China continues, some estimates suggest that additional tariffs could add an extra half percent or so to inflation, but so far the administration has gone out of its way to avoid imposing tariffs on consumer goods.

One cautionary sign is related to a lack of workers. The Bureau of Labor Statistics (“BLS”) estimated that roughly 6.9 million jobs were unfilled at the end of July, compared to 6.28 million available unemployed workers. This should put upward pressure on wages, either reducing corporate profits or putting additional upward pressure on inflation. A limited pool of labor can also restrict company growth and operations. For example, a client recently told us they’ve had to delay a planned construction project because their contractor simply could not find workers to man the project.

All-in-all, measures of economic activity remain sound and point to continued growth ahead, though the current stimulus fueled pace is unlikely to continue. Consensus is building that last year’s tax cuts have provided a solid boost to growth, but the effects are likely to dwindle back to 2-2.5% over the next few quarters.

Internationally, the rising dollar has put pressure on emerging markets economies. U.S. economic strength, fueled by the stimulus, seems to have drawn investors into U.S. capital markets. As the effects of the stimulus fades, the U.S. economic out-performance should moderate, and other markets should look better by comparison. While weaker than the current U.S. economy, growth in Europe and Japan appears to be steady and sustainable, backed by more attractive valuations.

Meanwhile, the strong dollar has put pressure on some of the weaker emerging markets economies. If moderating U.S. growth causes the dollar to soften, this could relieve the pressure. In addition, should trade tensions prove to be overblown, there is a potential catalyst for out-performance in emerging markets stocks. Of course, the downside risk is that trade tensions increase, throwing global supply chains into turmoil. This doesn’t appear to be priced into markets.

Although we feel a recession in the coming years may be likely, it’s nearly impossible to determine when that might occur or how far in advance markets could sell-off once it does happen. Other alternative outcomes are also possible, including additional debt-fueled fiscal stimulus to head off an economic decline. For now, the Treasury yield curve is modestly upward sloping (longer-dated maturities yield more than shorter maturities) signaling continued expansion.

One thing that has not worked particularly well over the past few months has been diversification. Investors have bid up the price of U.S. equities, particularly large company stocks, virtually to the exclusion of all else. This happens occasionally, and it never lasts.

Our exposure to diversifying investments (international stocks, investment grade bonds, etc.) delivered mixed results. Our bond positions broadly outperformed the bond market during the quarter’s turbulence due to strong results from our income diversifiers. Our investments in faster growing companies (“growth stocks”) performed well, as would be expected late in the economic cycle. International investments lagged U.S. stocks, as did MLPs.

We continue to believe that our portfolios are well positioned to generate returns late in the economic cycle. More importantly, they should be able to withstand the ups and downs of a more volatile stock market and bond markets as we head into the unpredictable mid-term elections. 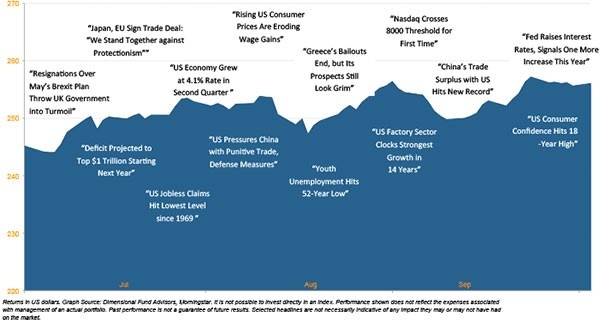 Download this Second Quarter 2018 Investment Review as a PDF
View reports on past quarters here, or visit our archives for reports prior to 2014.