After almost 17 months of remarkably low volatility, downside risk returned with a vengeance in February. The S&P 500 peaked on January 26th following 508 days without a drop of 2% or more. The index sold off a total of 10.2% during the first few days of February, recovering to end the quarter down about 1% from the beginning of the year. As we commented in February, such a long period without a significant drop is rare. According to JP Morgan, the S&P 500 experiences an average of one 10% drop and five 5% drops every year.

In the fixed-income markets, investment-grade bonds continued to struggle. The yield on the 10 year Treasury rose 0.50% during the quarter, before settling back a bit to 2.74% by quarter-end. This resulted in a loss of about 1.5% for intermediate-term bonds while shorter maturity bonds lost about 0.5%. Expectations of higher interest rates also punished real estate stocks (REITs), which were down almost 6% during the quarter. MLP stocks fared worse, down about 11% as investors broadly shunned income generating sectors of the stock market.

Considering the amount of information investors were dealing with, things could have been a lot worse. Despite having a new Federal Reserve Chair, rising interest rates, a potential trade war and nearly weekly scandals swirling through Washington, D.C., the stock and bond markets ended the quarter down less than 2%.

While we remain optimistic about the future of the economy, it is not without reservation. As we’ve seen during the quarter, the U.S. Administration is working aggressively to restructure global trade relationships. President Trump first announced steel and aluminum sanctions, then additional sanc-tions on Chinese exports. This increases risks and uncertainty for both domes-tically focused companies as well as trade-related businesses. As we’ve stated repeatedly, our main concern is something that really can’t be predicted: a policy error with significant unintended consequences.

Even amid heightened concerns over the potential for increasing trade tensions, global economic growth remains broad-based and should continue to support corporate earnings growth and financial assets in general. Overnight interest rates charged by central banks remain low and supportive of growth across the major developed economies. That said, these same central banks are working to gradually normalize (raise) interest rates.

Domestically, first quarter economic growth is likely to come in a little below 2% before picking up speed during the year and possibly into 2019 as well. This has been a fairly typical cyclical pattern for the past several years and indica-tors point in that direction today. As we stated last quarter, we still anticipate GDP growth in 2018 to be somewhere in the 2.5% to 3% range for the full year, absent some significant policy error which jolts global economies.

The Federal Reserve (“the Fed”) has already hiked short-term interest rates once, and we think they will likely raise interest rates two or three more times in 2018 as unemployment falls and inflation picks up. Core measures of inflation are on track to hit and possibly exceed the Fed’s 2% target this year.

Besides managing inflation, the Fed’s other mandate is to help maintain full employment. Unemployment has stabilized at around 4% and is expected to trend lower during the year as the effects of the December tax cuts work their way into the economy. The fiscal stimulus from 2018’s expected trillion dollar Federal budget deficit should help offset the economic cooling impact of rising interest rates. This gives the Fed more flexibility to normalize monetary policy (interest rates) as they prepare to deal with the next recession.

In the weeks following the tax cut in late December, many stock analysts adjusted their expectations for future earnings upward. As a result, the S&P 500 trades near average valuation levels based on forward earnings estimates. As we’ve noted before, analysts are often overly optimistic about future prospects, and stocks still look very expensive based on backward looking (historical) valuation metrics.

With U.S. equity valuations very high, international stocks look relatively cheap by comparison, providing much more room for prices to rise over the next several years. Furthermore, global economic growth continues to look attrac-tive and foreign central banks are working to ease up on the stimulus measures still in place.

U.S. bond markets remain a difficult place to make money in the short-run. With interest rates poised to rise, investment grade bonds seem unlikely to provide more than low single-digit returns in the near-term. In order to maintain portfolio values in the face of rising interest rates, we continue to diversify across short- and intermediate-term bonds, as well as investment grade and non-investment grade bonds. Despite the potential for short-term volatility, intermediate-term bonds usually rise when stocks are falling. This ability to offset stock market losses makes them an important portfolio build-ing block and a core holding across our balanced portfolios. Investors need to remember that while stocks rose and lost about 10% during the quarter, in absolute terms, bonds had one of their worst quarters in a very long time, yet only lost about 1%.

Our globally diversified portfolios held up reasonably well during the quarter, though our exposure to diversifying investments (not core stocks or bonds) again delivered mixed results. Our bond positions broadly outperformed the bond market during the quarter’s turbulence and our income diversifiers performed extremely well. Our international stocks also added value, as did our investments in faster growing companies (“growth stocks”). Income producing equity assets like consumer staples stocks, real estate and Master Limited Partnerships all suffered as interest rates rose during the quarter.

Despite the difficulties of the first quarter, we believe that our portfolios are well positioned to generate returns late in the economic cycle, and to benefit from the current growth in the economy. More importantly, they should be able to withstand the ups and downs of a more volatile stock market.

The chart below shows the change in global equity markets throughout the year. Juxtaposed over the market performance are some of the key events that occurred during the
period. Sometimes as we get to the end of a volatile period, it’s difficult to look back and remember everything that happened along the way. 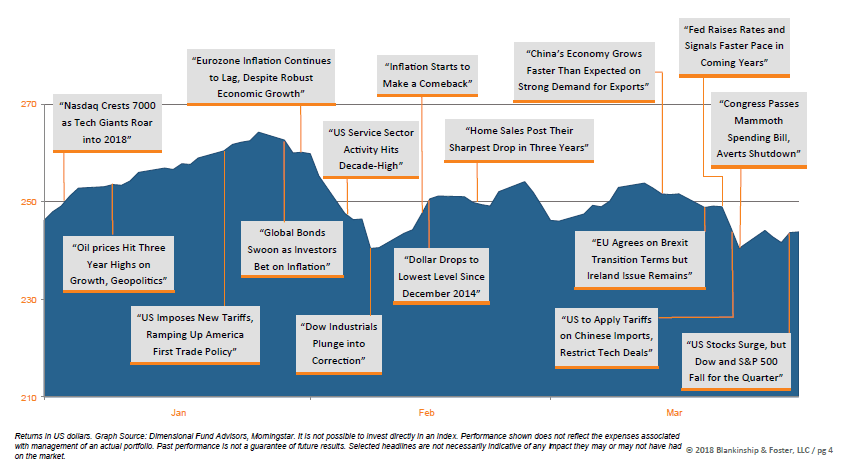 Download this First Quarter 2018 Investment Review as a PDF

View reports on past quarters here, or visit our archives for reports prior to 2014.