The U.S. market finished the year with impressive gains. The S&P 500 rallied decisively in the fourth quarter as the U.S. Congress debated and ultimately passed a tax reform package. Smaller U.S. companies did well during the quarter, but lagged the larger companies for both the quarter and the year. Large company growth stocks—technology stocks in particular—once again outperformed the broad market, up more than 30% this year, compared to the S&P 500 index which is up about 22%. Smaller company stocks, already quite expensive, rose 15%.

International stocks gained 25% for the year, but the clear winner was emerging markets stocks, up 37% during 2018. The U.S. dollar continued its decline against major foreign currencies, providing a nice tailwind for U.S. investors in international stocks.

In the fixed-income markets, investment-grade bonds basically earned their coupon, gaining 3.5% for the year as the yield curve continued to flatten. During the year, short-term interest rates rose while long-term rates eased modestly. The 10-year Treasury yield (which moves inversely to bond prices) bottomed in September at 2.05% and ended the year about where it began: 2.40%. Credit-sensitive sectors of the fixed-income market tracked core bonds for the quarter, but gained a solid 7.5% for the year despite struggling in the fourth quarter.

We are optimistic as we look ahead into 2018. Global economic growth remains broad-based and should continue to support corporate earnings growth and financial assets in general. Monetary policy (government) interest rates remain broadly supportive across the major developed economies.

Domestically, consensus has grown that the corporate tax cuts passed by Congress should be mildly supportive of economic growth, perhaps adding 0.2-0.4% to Gross Domestic Product (GDP) in 2018. Companies are expected to use the excess cash generated from these cuts to buy back shares of stock or to increase dividends, both of which are supportive of equity prices but have little lasting impact on economic growth (productivity, corporate investment, etc.). Barring some calamity, we anticipate GDP growth in 2018 to be some-where in the 2.5% to 3% range.

Core measures of inflation (excluding volatile food and energy costs) seem likely to rise to 2% during the year as the fiscal stimulus drives unemployment below 4% and begins to overheat the U.S. economy. As a result, we think the Federal Reserve will likely raise interest rates three or four times in 2018 as unemployment falls and inflation heats up. Two additional factors should contribute to rising interest rates: increased Federal government borrowing as a result of a larger U.S. budget deficit and easing foreign monetary stimulus as foreign central banks begin to follow the Federal Reserve and normalize rates.

Despite the continued growth in the economy, U.S. stocks continue to trade at very high valuation multiples, comparable to the heights of 1999-2000 or 2006-7. Valuations can continue to rise, but the higher they go the more dramatic the fall when it happens. As a result, we continue to be underweight in U.S. stocks and to use other diversifiers to help dampen the risk of a large decline in stock prices.

With U.S. equity valuations very high, international stocks look relatively cheap by comparison, providing much more room for prices to rise over the next several years. Furthermore, global economic growth has only recently begun to accelerate following a long period of stagnation after the financial crises of 2008 and 2011, giving foreign stocks significantly more room to grow com-pared to the U.S. stock market. Because of this accelerating growth, we expect that the Bank of Japan (BOJ) and European Central Bank (ECB) will begin to remove the monetary support measures currently in place, allowing interest rates to rise in their respective markets and putting some upward pressure on their own currencies.

Even so, investment grade bonds still serve a vital purpose in a balanced portfolio as a volatility counterweight. Because of our expectation for rising interest rates, we continue to be defensive in our bond positioning by being overweight in shorter-term bonds and still maintaining some higher yielding lower quality bonds.

Our optimism for economic growth and market gains is not without caution. As the U.S. Administration enters its second year, global trade tensions are rising, increasing the risks and volatility to corporate earnings (and therefore, stocks). Also, as we’ve mentioned, global central banks are beginning to normalize their interest rate policies, raising the possibility of unintended
consequences or tightening financial conditions too quickly. Finally, rising geopolitical tensions in Korea and elsewhere cannot be predicted, but they cannot be ignored, either.

2017 was a great year for the markets and a good year for our globally diversified portfolios. Investors should remember that balanced portfolios can never keep up with a strongly rallying stock market, and 2017 was no exception. Like the heady bull market of 1996-2000, or 2005-2007, this market continues to trade higher and higher. Corporate profits have been one driver of these returns, but so have expanding valuation multiples as investors paid higher prices for those rising earnings. At year-end, the S&P 500 was trading at roughly 25 times last year’s earnings; a fairly frothy level given the uncertain-ties ahead.

During the past quarter, we implemented a couple of changes to our portfolios. We increased our allocation to international stocks (while toning down our currency hedges). We also trimmed our exposure to high yield bonds. Given our low expected returns on investment grade bonds and unattractive valuations for riskier income, we remain cautiously positioned. We are also maintaining some exposure to diversifying investments which should (and have) act differently than ‘plain old’ stocks or bonds.

In short, we are positioned to benefit from improving economics domestically and overseas while bracing for higher volatility. 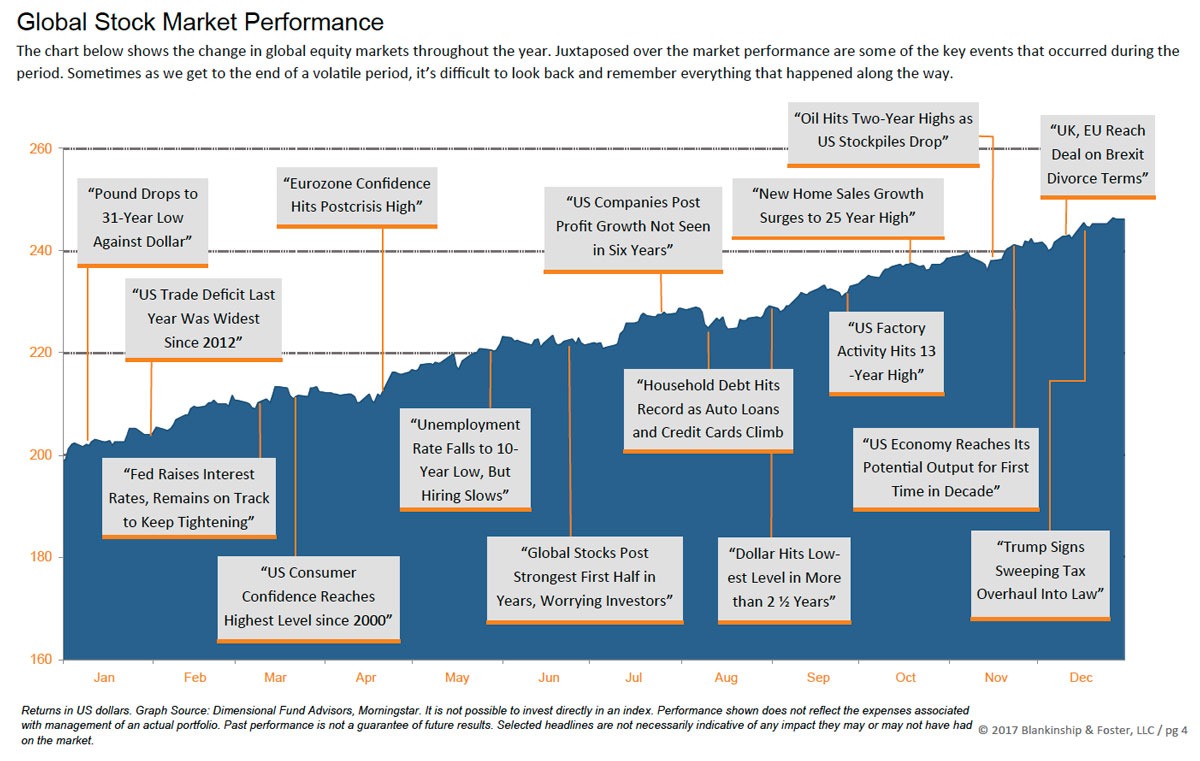 Download this Fourth Quarter 2017 Investment Review as a PDF (1.2 MB)
View reports on past quarters here, or visit our archives for reports prior to 2014.