If there is one theme from the past three months, it is that volatility has returned. At the beginning of the quarter, investors were actively discussing the possibility of Greece leaving the Euro currency (a “Grexit”) and markets were convinced the Federal Reserve (“Fed”) would be raising interest rates in September. However, Greece meekly accepted the German-led bailout package and all eyes shifted east as concerns increased about China’s economy.

A surprise (albeit modest) devaluation of the yuan currency helped trigger a sharp drop in global equity markets in late August, with the S&P 500 falling 12% from its high reached in July. The S&P 500 then bounced briefly from its August 25 low but dropped an additional 2.5% in September, ending the quarter down 6.4%. This marks the first negative quarterly return for the index since 2012. 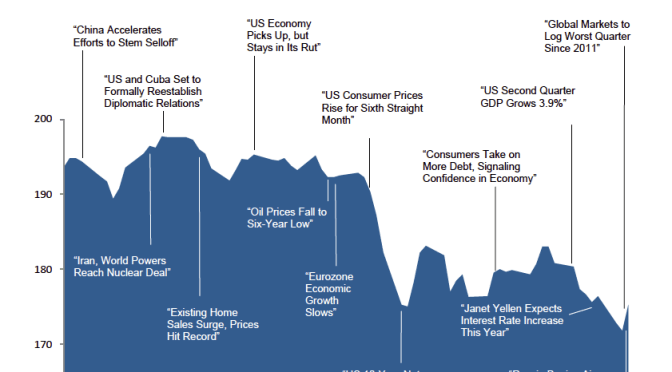 Developed international stocks, as measured by the MSCI EAFE (Europe, Australasia and Far East) Index, also dropped, ending the quarter down 10.2%. Emerging markets stocks fared the worst, dropping 20% from their intraquarter high in early July to their low on August 24. For the quarter, the emerging markets stock index was down 17.9%, including substantial losses to U.S. investors from the continued depreciation of emerging markets currencies against the U.S. dollar.

The bond market (represented by the Barclay’s Capital U.S. Aggregate Bond Index) gained about 1% during the U.S. stock market’s 12% drop during the quarter. This is why we own bonds, even in more aggressive portfolios: their tendency to remain calm when riskier assets like stocks are struggling. While the absolute level of gains is not going to be exciting in coming years, they are still useful as a stabilizing asset in most portfolios.

Given the broad negative environment for global stocks during recent months (much of the angst was driven by disappointing developments in China) it’s not surprising emerging markets stocks had the worst downside performance. While we continue to view emerging markets stocks as attractive over our five-year and longer investment horizons, we have also assumed they are riskier than developed market equities and come with significantly greater short-term downside risk.

Besides China, the big question on everyone’s mind during the quarter was whether the Federal Reserve would raise interest rates at their September meeting. Looking at weaker global economic activity complicated by a rising dollar, they decided not to hike rates. This would have further strengthened the dollar at a time when U.S. exports were already struggling.

The stronger dollar has crimped U.S. exports. This has also combined with cheaper oil to keep inflation in check and provide a modest boost to consumer discretionary income. While manufacturing has generally struggled during the quarter, vehicle sales are near pre-recession levels and the services sector (about 70% of the economy) has been very strong. The economy has clearly hit a soft patch during the quarter, but barring a significant shock to the system we should see decent growth heading into year-end.

While the stock market decline made future returns for U.S. stocks look incrementally better, the price drop was not large enough to lead us to increase our U.S. stock exposure. Our analysis still indicates that over a broad range of scenarios, expected returns for U.S. stocks over the next five years remain modest. Valuations are still stretched and corporate profits are at the high end of historical norms, suggesting more room for disappointment going forward.

We continue to have a positive view of international stocks. We believe European stock valuations are much more attractive than those of U.S. stocks, while European corporate earnings are well below normal, allowing more room for improvement and upside surprises. We see potential for both improved earnings growth as well as some multiple expansion, implying potential outperformance for European stocks compared to the U.S. market over our five-year outlook.

After recent declines in emerging markets stocks, we now view them as more attractive, to varying degrees, than developed country stocks. Specifically, our research suggests that returns could be comparable to what we expect from U.S. stocks in our optimistic scenario and from European stocks in our base case scenario. This means we believe the risk/reward of adding to emerging markets stocks is now attractive, and as such, at the end of September we modestly increased our emerging markets exposure. Importantly, we think our assumptions adequately capture the risks stemming from a slowdown of growth in China and other emerging market countries.

For fixed income (bonds), the events of the third quarter did not lead to any material changes in our views. Looking out over the next several years, our expected returns for core bonds are very low in almost any reasonably likely scenario. This is why we have invested a large portion of our fixed-income allocation in more flexible bond strategies and other alternatives. Based on our analysis of each fund’s strategy and our assessment of the managers’ strengths, we believe these funds have the potential to outperform the broad bond market over the next five years. Nevertheless, we still maintain exposure to core bonds in our portfolios because of the risk management role they play—smoothing overall portfolio volatility and mitigating some of the downside risk of owning stocks in the event of a global growth scare, recession, or worse.

Finally, we continue to see diversification benefits from exposure to a highly select group of alternative strategy managers. The alternative strategies we own are intended to generate long-term returns that are better than core bonds, generally with lower downside risk and volatility than stocks and relatively low or no correlation to stock and bond market indexes. Beyond this strategic rationale for owning select alternatives, on our current tactical view we believe they can generate returns at least comparable to U.S. stocks across our most likely scenarios, but with less risk.

As always, we appreciate your confidence and welcome questions about your individual portfolio.

Download this Third Quarter 2015 Investment Review report as a PDF (124kb). View reports on past quarters here, or visit our archives for reports prior to 2014.