Global stock markets generally fell in the third quarter, although U.S. large company (large cap) stocks bucked the trend with the S&P 500 gaining 1.1%. Smaller company stocks were down 7.4%. Year to date, large cap stocks gained 8.3% versus a decline of 4.4% for the small cap benchmark. Our portfolios are tactically underweight small caps—a beneficial stance given this year’s performance divergence between the two asset classes. 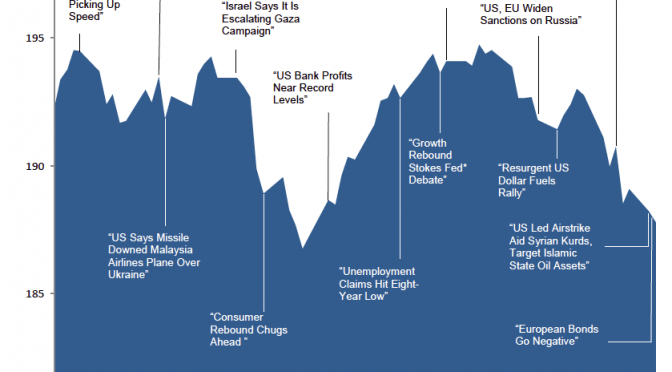 Our view has been that while U.S. stocks, broadly speaking, are somewhat expensive relative to companies’ earnings potential (i.e., valuations are high relative to fundamentals), small caps have been particularly overvalued and are more vulnerable in market sell-offs.

Developed international and emerging markets stocks fell during the quarter, particularly in dollar terms as the U.S. dollar rose against other currencies. (A stronger dollar reduces returns on investments denominated in foreign currencies.) In the bond market, short-term yields rose slightly as the Federal Reserve continued to wind down its bond buying program and investors began to anticipate rising short-term interest rates. The core bond benchmark was essentially flat for the quarter.

Economic activity surged during the second quarter, growing at a 4.6% pace. Although expectations are for slower growth into 2015 and 2016, this was enough to allow the Federal Reserve (Fed) to wind down their bond purchases in October, as expected. With that done, the Fed should start raising the short-term federal funds rate around mid-2015, assuming economic growth and job gains continue. Key to the Fed’s monetary policy decisions is the outlook for U.S. inflation, wages, and employment.

In the most recent three months, the observed inflation rate stabilized at levels below the Fed’s long-term target of 2%, and inflation expectations remained relatively stable as well. This means the Fed doesn’t have to worry about inflation yet. It also means that core bond interest rates are unlikely to move sharply higher. Low interest rates in Europe and other developed economies should also help keep a lid on Treasury bond yields as investors shift their cash to (higher yielding and safer) Treasury bonds. This has also caused the U.S. dollar to strengthen, something we expect to continue.

While wage gains during the quarter were solid, they remained well below what (Fed Chair) Janet Yellen has said she wants to see as evidence of a healthy labor market. Broader indicators of labor’s share of the economy also suggest we are still early in the cycle of wage gains. While additional wage growth and rising labor income would be good for the economy, it would likely come at the expense of corporate profit margins (which remain around historical highs). This could impact earnings growth and stock market valuations.

On the employment front, despite a disappointing August number, job gains (U.S. nonfarm payrolls) continued to be reasonably strong—averaging 207,000 per month over the three months through August. For the first eight months of the year, job growth has averaged 215,000 per month, the highest rate since 1999. Even so, the recovery in jobs following the 2008 financial crisis continues to lag what is typical after previous U.S. recessions. The unemployment rate dropped to 5.9% in September, still above the Fed’s estimate of “full employment” in the low-5% range. However, the labor force participation rate remains stuck at a 36-year low, representing millions of workers who are no longer being counted. Taking these and other employment indicators into account, the Fed reiterated its view that “there remains significant under-utilization of labor resources.”

In early September, soft economic data and deflationary indications in the Eurozone forced the European Central Bank (ECB) to announce additional stimulative monetary policy actions. The ECB not only cut rates but also announced plans to buy private sector asset-backed securities and other bonds backed by loans from banks. Their goal is to increase the flow of credit to the real economy.

Essentially, the ECB will “print euros” to buy securities, similar to the Federal Reserve’s Quantitative Easing (QE) program but on a much smaller scale. In theory, buying the securities from banks will free up capital, enabling banks to make new loans to businesses and stimulating growth. If these measures don’t do enough to move the economic needle, the ECB may ultimately have to engage in a large-scale QE program—as the Fed, Bank of England, and Bank of Japan have all done—in order to try to prevent deflation from taking hold in the Eurozone.

Deflation in Europe would be very bad for the global economy and equity markets. On the other hand, the ECB’s efforts to avoid deflation with a strong QE program could boost global stock markets just as the Fed is starting to tighten U.S. monetary policy. Non-U.S. stocks carry somewhat more attractive valuations than do U.S. companies, and any improvement in the Eurozone could propel markets higher.

We remain fairly sanguine that U.S. economic growth will be moderate in the coming months. This should be sufficient to slowly build on labor market gains but unlikely to generate significant expansion or inflation. This makes us optimistic, at least for the near-term, that corporate profits should remain solid even as wage pressures build.

Inflation, the single most important factor in longterm interest rates, remains tame—despite vehement predictions to the contrary since 2008. A rising dollar as a result of capital flowing into the U.S. (from overseas investors seeking higher yields) should further mitigate inflationary pressures. As the Fed begins to raise the fed funds rate next year, it’s quite possible we may see only gradual longer-term interest rate reaction. Uncertainty about expected Fed policy changes in 2015 and their market impact should lead to increased volatility as we get closer to the actual event next year.

Our outlook for individual asset classes has not changed materially from last quarter. The overall environment still seems supportive of higher equity prices due to mild but positive economic growth, low inflation, accommodative Fed policy, and weak expected returns from other asset classes. This may continue to be the case in the near-term. Still, our research continues to point to subpar return expectations for most asset classes over the next five years. Even so, upward stock market trends may continue for a while. We currently maintain allocations to alternative strategies that will allow us to shift money into stocks when valuations are more attractive. Our fixed income exposure includes flexible strategies that have higher return potential in a rising-rate environment, while still maintaining some core bond exposure for portfolio risk-management purposes.

As always, we appreciate your confidence and welcome any questions you might have about this quarter’s market update or your individual situation.

Download this Third Quarter 2014 Investment Review report as a PDF (110kb). Visit our archives for reports on past quarters.