The U.S. stock market rebounded from its January losses and hit record highs by the end of February with large company stocks pushing into positive territory for the year to date (up 1.0% through February’s end). 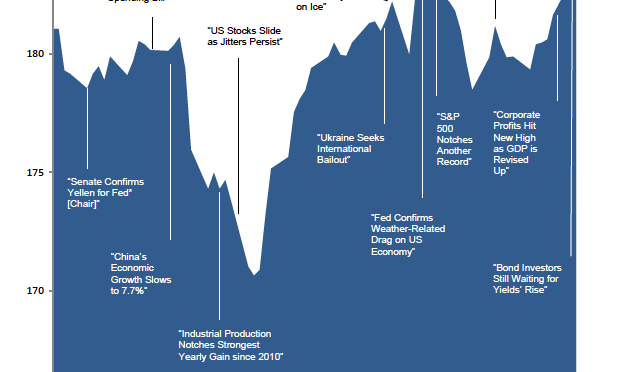 As we saw throughout 2013, the stock market gains occurred despite a continuing stream of mixed (and at times, poor) economic data. In February, some of the more disappointing data releases included a significant downward revision of fourth quarter 2013 Gross Domestic Product (GDP) growth (to 2.4% from 3.2%). As a result, the second estimate was sharply lower than last year’s strong third quarter growth number. February also brought reports of lower than expected job growth and retail sales as well as relative weakness in U.S. factory production. It is likely that the extreme winter weather in large portions of the country may have affected the data to some extent.

On the positive side of the ledger, housing, consumer sentiment, and business activity all had favorable updates recently. Another reason for market optimism appears to be the Federal Reserve’s assessment of U.S. economic strength. As new Federal Reserve Chair Janet Yellen assumed official leadership in February, investors got a sense of her current views through two congressional testimonies during the month. She indicated she expects to continue to taper or reduce its purchases of bonds (Quantitative Easing, or “QE”). Of course, this could change with further deterioration in U.S. economic data.

As always, there is a lot of noise in the short term data, and while the markets seem to react day-to-day based on new headlines, it’s not part of our investment process to do so. We remain of the view that the U.S. economy is recovering at a modest pace, far below the historical average, while stock valuations seem to reflect high expectations for future growth. This mismatch is part of the reason we remain modestly underweight in U.S. stocks in our strategies. Still, we retain a weighting significant enough that our strategies participated in the month’s gains.

Sentiment in Europe has improved, helping stocks in Europe based on increased optimism for recovery—and perhaps lessening concern about deflation. Emerging markets have struggled amidst several factors such as falling currencies and rising civil unrest. In China, their government is dealing with slowing growth while it attempts to manage a potential debt bubble.

There have also been interest rate hikes by countries with some of the harder-hit currencies as of late (India, South Africa, Brazil, etc.). We cannot rule out the possibility of further losses in emerging markets stocks and bonds, but we continue to believe that their modest valuations (relative to developed markets) should help to limit downside risk and set the foundation for future gains.

Bonds are up 2% through February thanks to their strong returns in January as the stock market swooned. Overall, the yield on the 10-year Treasury has fallen from the end of 2013, hitting 2.66% at the end of February, down from 3.04% at year end. Municipal bonds have been particularly strong in 2014, following a challenging year in 2013 when headline risk such as Detroit’s bankruptcy hung over the market. We have maintained our allocations to these bonds in our tax-sensitive portfolios.

As always, we appreciate your confidence and welcome questions about your individual situation.

Download this First Quarter 2014 Investment Review report as a PDF (110kb). Visit our archives for reports on past quarters.