Don’t Give Up on Charitable IRA Rollovers for 2014

Charitable IRA Rollovers (also called Qualified Charitable Distributions, or QCDs), have been allowed by IRS rules off and on since 2006. The most recent extension of the rules expired in 2013, and has not yet been renewed. However, in July the House of Representatives passed a proposal to make charitable IRA rollover legislation permanent, and the Senate passed a temporary extension of the QCD in April, so it looks likely that this popular provision will be brought back before the end of 2014. 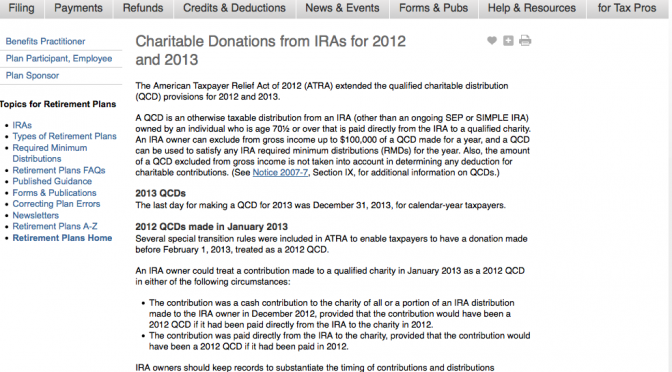 How QCDs Leverage Your Charitable Giving

A Charitable IRA Rollover allows IRA owners aged 70 1/2 and over to make distributions of up to $100,000 from their IRA in order to satisfy the IRA required minimum distributions (RMDs) for the year. These distributions cannot be deducted as charitable contributions, but are excluded from the IRA owner’s income if the IRA funds are paid directly to qualified public charities.

Excluding an IRA distribution from your Gross (or “Above the Line”) Income is often more valuable than receiving a “Below the Line” Itemized Deduction for the same charitable contribution. There are several reasons for this.

One big downside to the charitable IRA distribution: it can’t be used for a donor advised fund or private foundation.

Does it Pay to Wait?

It’s not fun to be in limbo, hoping the QCD provisions are extended. And we’re certain that your most treasured charities are in need of money now! Still, unless your charity is broke, it probably pays to wait and see if the provision is brought back. Unfortunately, the fate of the QCD likely won’t be known until after the November elections – and that won’t leave much time before the end of the year.

Our recommendation: Don’t wait until November to think about it. Determine now whether a 2014 charitable IRA rollover will benefit you enough to make the waiting worthwhile. Some people may even be better off forgoing the QCD and choosing a different charitable strategy- such as donating appreciated stock to your charities or to a Donor Advised Fund.

At Blankinship & Foster, we routinely help our clients weigh decisions like this, and to choose the best decision. Contact us if we can help you determine if a 2014 charitable IRA rollover is best for your unique situation.