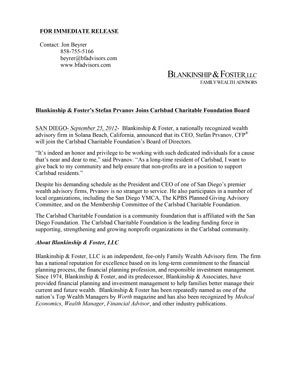 “It’s indeed an honor and privilege to be working with such dedicated individuals for a cause that’s near and dear to me,” said Prvanov. “As a long-time resident of Carlsbad, I want to give back to my community and help ensure that non-profits are in a position to support Carlsbad residents.”

Despite his demanding schedule as the President and CEO of one of San Diego’s premier wealth advisory firms, Prvanov is no stranger to service. He also participates in a number of local organizations, including the San Diego YMCA, The KPBS Planned Giving Advisory Committee, and on the Membership Committee of the Carlsbad Charitable Foundation.